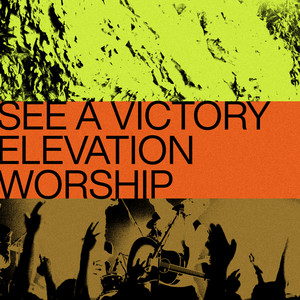 “See a Victory” is a song performed by American contemporary worship band Elevation Worship released as the lead single from their seventh extended play, At Midnight (2019), on August 9, 2019.[1] The song was written by Chris Brown, Ben Fielding, Jason Ingram and Steven Furtick.[2] Chris Brown and Aaron Robertson handled the production of the single.

“See a Victory” was a commercial success, having reached No. 5 on the US Hot Christian Songs chart while becoming Elevation Worship’s fifth top ten on the chart.[3] It has been certified gold by Recording Industry Association of America (RIAA).[4]

“See a Victory” came into view with an announcement by Elevation Worship that it would be released as the lead single from the extended play At Midnight, the song’s release being slated for August 9, 2019.[5][6] The song, with its accompanying live performance video, was released that day, along with availing of At Midnight for pre-order.[1] Elevation Worship announced that “See a Victory” will impact US Christian radio stations on January 10, 2020.[7]

The story behind the “See a Victory” was shared in Elevation Worship’s announcement of the song being released to Christian radio.[7] Chris Brown said:

You know, worship is a powerful weapon. It’s like a counter-attack on whatever the enemy is trying to bring against you. When you’re facing or battling anxiety, choose to worship your way through it. If you’re feeling overwhelmed or uncertain, you can choose worship. In 1 Corinthians 15, it says, thanks be to God who gives us the victory through our Lord Jesus Christ. You can stand on the authority of the word of God, that whatever you’re up against, it is no match for Jesus. He’s never lost a battle before, and he’s not going to start with yours. Our new song, “See A Victory,” has become one of those songs that I’ve put in my own personal armory when I’m in the middle of a struggle or a fight. When I choose praise over fear, even in the face of overwhelming odds, I can trust that God is fighting my battles for me, and he’s turning things around from my good in his glory. — Chris Brown[7]