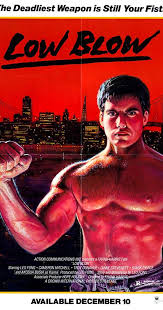 Low Blow (released in the Philippines as The Last Fight to Win: The Bloody End) is a 1986 film edited, shot, and directed by Frank Harris and released through Crown International Pictures. It is about a private investigator that goes on the hunt for a girl who has been taken in by a religious cult. He recruits a team to help him in his quest to rescue the girl. It stars Leo Fong, Cameron Mitchell, Troy Donahue, Akosua Busia and Stack Pierce.

A young heiress is in the clutches of a weird religious sect which is based in a rural compound. The cult leader (played by Cameron Mitchell). At his side is a lady called Karma (played by Akosua Busia) who has a vocal prowess. She is also the lover of the leader.[1] Joe Wong (played by Leo Fong) is former policeman,[2][3] who has been hired by her businessman father to bring her back to him safely.[4] He teams up with a group to help him which includes a Vietnam vet and a pro-boxing champ.[5]

The film was directed by Frank Harris. Leo Fong produced the film and Hope Holiday was the associate producer.[7] Leo Fong also wrote the story.[8] The film also features Billy Blanks in his first film role.[9][10]

Low Blow was released in the United States in 1986. In the Philippines, the film was released as The Last Fight to Win: The Bloody End by Movierama Films on October 13, 1988, connecting it to the unrelated film Fight to Win; the film poster miscredits Jean-Claude Van Damme as its writer and director.[11][12]